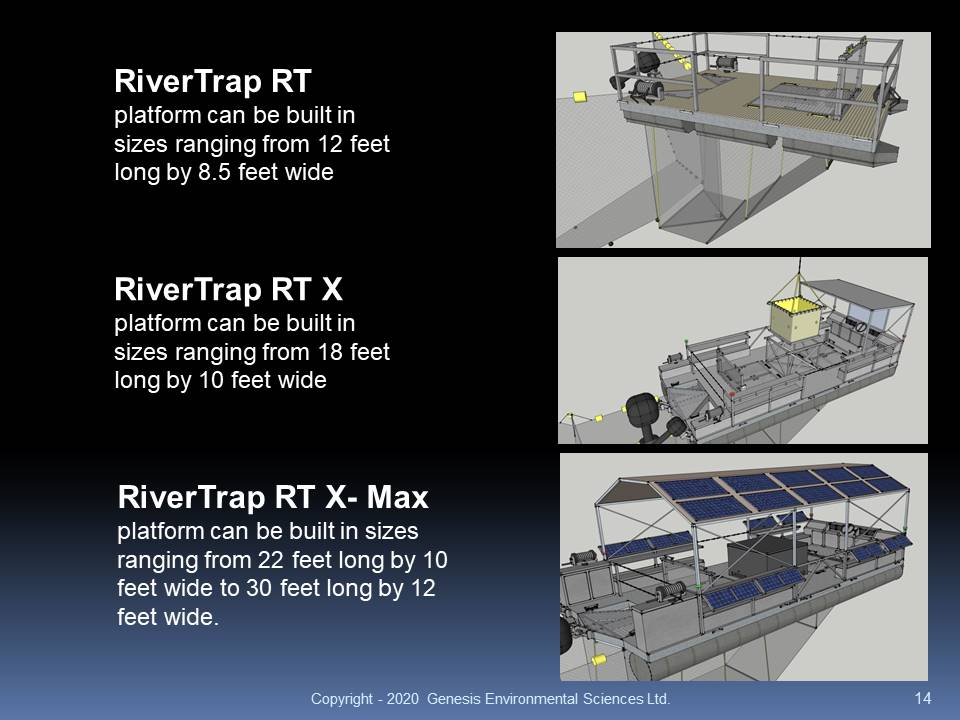 The simplest application is to select a platform size that suits the situation within which fishing will occur.  Testing will be done for near shore traps which are fixed in position using a re-movable pole system.  The wing net configuration can be changed to suit the bottom structure, changeable currents or changes in fish movement. 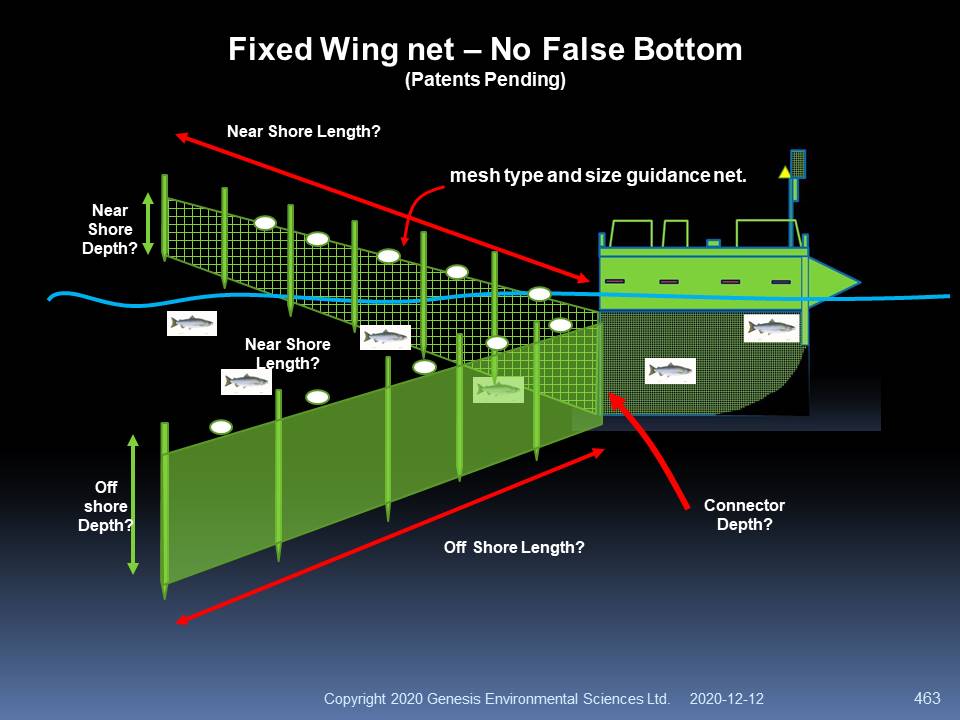 ​Below is one of the first concepts to be tested using the Basic River Trap RT model design combined with traditional beach seining techniques.
RiverTrap™ in Drift Fished Mode

One of the versatile techniques to be tested is using the RiverTrap RTX or crossover designs for drift fishing.  The RTX can cross over to multiple uses by having a specific double ended net connection system (The double ender).  This will allow the platform to operate in reverse mode by drifting downstream with the current using the main engine(s) to provide direction while pilot boats guide the wing net.  For science and engineering fans, this draws on Einsteins theory of relativity where two objects moving at the same speed do not see any velocity or force between them.  In this case the platform moves at the same speed as the river water so the nets hang vertically with no drag force.  However fish swimming upstream will enter the wing nets and encounter the false bottom and move into the false bottomed throat net and then into the containment (pound net).  Once inside, the pound net can be raised, non-endangered fish selected and removed and non-target fish are released via the escape gate and are  un-touched and un-exposed to air. This would allow for a very high survival rate of the non-target fish.

This has a high net deployment efficiency as the wing nets do not have to be retrieved as would be the case in drift fished gill nets.  In the gill nets case, the nets are only allowed out for a 1/2 hour soak and then have to be retrieved which drags the entire net back into the boat.  The entangled non-target fish have to removed from the net mesh, revived and if they have been entangled for 1/2 hour (or longer) their survival rate is very low.

​Additional Information will be posted at this site as subsequent projects reach pilot scale status. 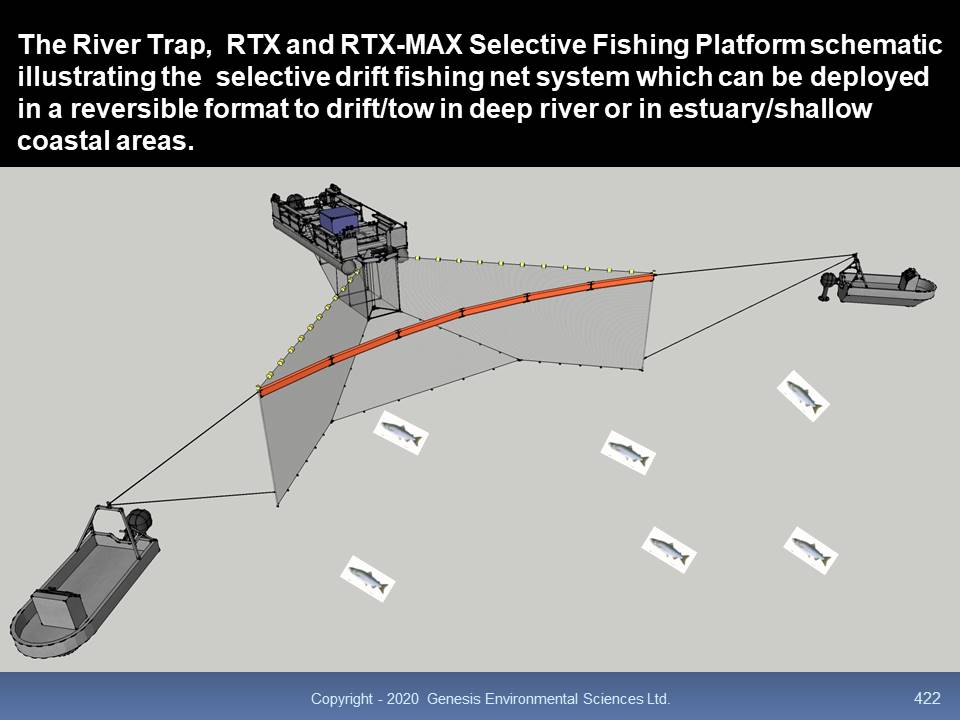 Another benefit of the versatile  RiverTrap RTX or crossover designs is for oil spill support and response.  The RTX can cross over to multiple uses by having a specific double ended net connection system (The double ender).  In this version, the containment net under the platform is replaced by a containment oil boom and the wing nets are replaced by wing booms.  This will allow the platform to operate in reverse mode by drifting downstream with the current in a river or in sheltered offshore waters using the main engine(s) to provide direction while pilot boats guide the wing booms.

If a call is received to respond to an oil spill, the   RiverTrap™  platform is designed to quickly convert over by removal of the nets, and loading on the oil spill support and response equipment and travel to the spill site.  At the spill site, the support equipment can be deployed and the oil spill booms attached.  Under the direction of the oil spill response commander, the operators of the RiverTrap™  platform can provide equipment by bringing the shallow draft vessel into areas that are difficult for other boats to reach.  It is a stable platform that can also capture spilled oil and store it on board.  In this manner the vessel has a distinct capital cost savings advantage as for 99.99% of the time it will be used for fishing and still be in close proximity to its home base and available to respond in the 00.01% chance that there is an oil spill in the region.  This dual use will help reduce oil spill capital costs, reduce impacts and therefor minimize environmental damage and insurance and recovery costs.  It will have an economic benefit to the user groups in providing fishing income for the entire fishing season each year.

Should it become involved in an oil spill, the all aluminum construction can easily be de-contaminated and put back in service for fishing.  This is different than fiberglass hulled vessels which are very difficult and expensive to be de-contaminated once exposed to an oil spill.​
Emergency Response and Support capability.  The platform can also be designed to support emergency response and search and rescue.  Should and oil spill or flood occur, it is unsafe to fish.  The fishing gear can be quickly removed and replaced with search and rescue support materials.  The platform can be designed with a loading ramp to facilitate the movement of equipment such as All Terrain Vehicles onto it.  Vertical side pontoons with Ultra High Molecular Weight Polyethylene skid plates help protect the vessel.  If the platform is outfitted with outboard jet engines, it will provide for shallow draft maneuverability purposes. 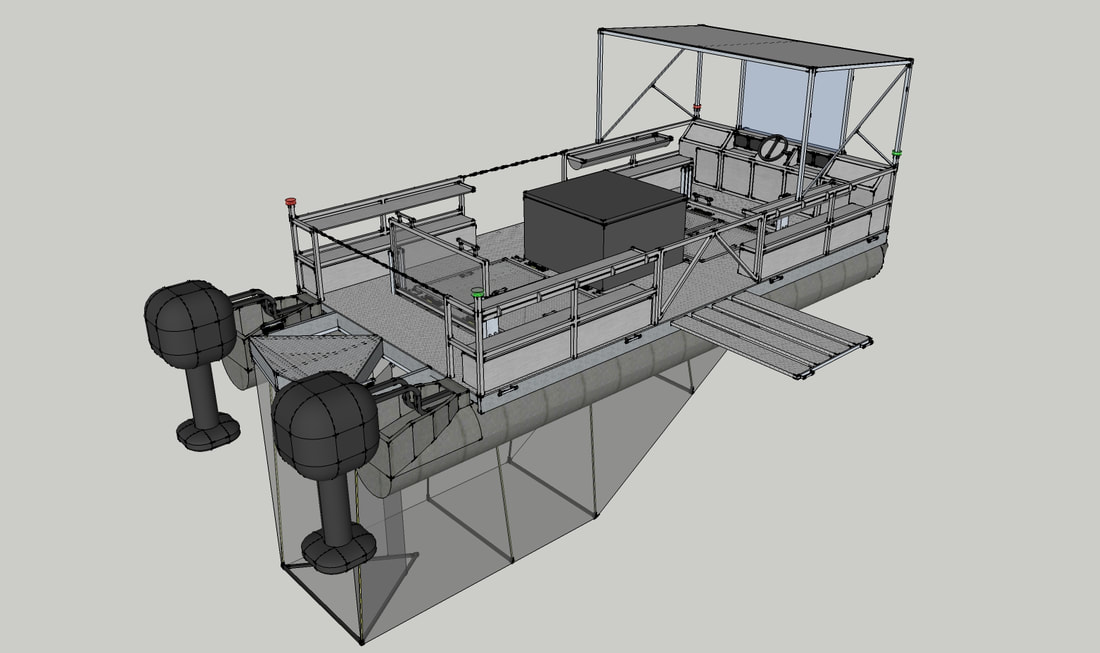